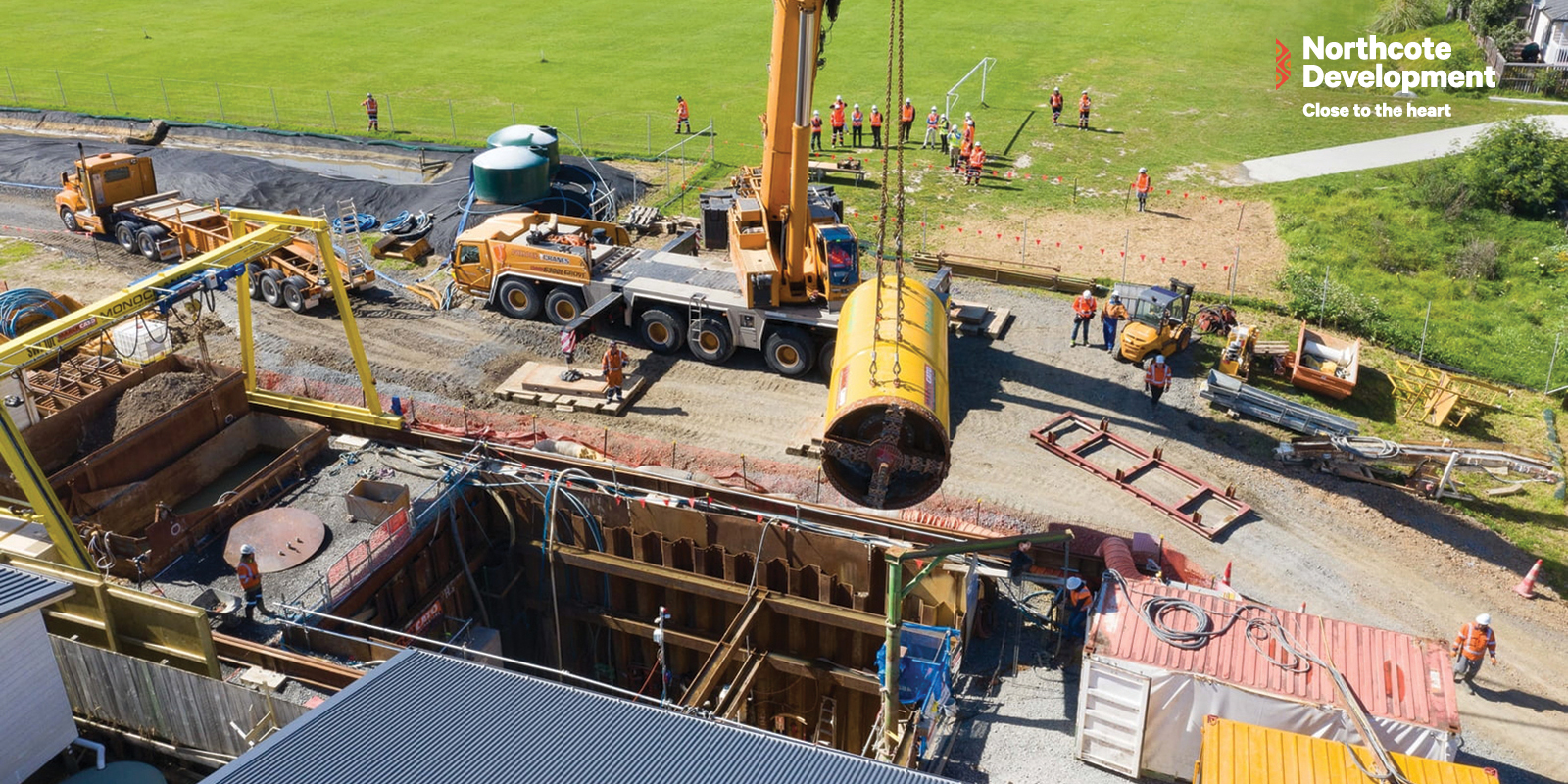 The infrastructure upgrade will protect the suburb during heavy rainfall events and significantly reduce major flooding issues that Northcote has had in the past.

“With around 1500 new homes being built in the Northcote Development, the whole stormwater network needed to be upgraded,” says Kāinga Ora Development Manager William Gao.

“It was a necessity to enable growth in the area and to future-proof the suburb
for generations to come.” The underground tunnel was a collaborative project between Kāinga Ora, Piritahi and Auckland Council’s Healthy Waters.

Several different stormwater options were considered, but the most feasible solution was using a tunnel boring machine (TBM) to install an underground drainage system. This was done to minimise disruption to neighbouring residents while allowing the tunnel to follow the preferred path.

“The safest, most cost effective and efficient way to do this was to tunnel-bore it,” William says. In late September last year, the 40-tonne TBM arrived at the site at 54 Tonar Street. It was hoisted by a crane and lowered into a seven-metre deep hole in the ground.

The TBM works like a large drill. It has a cutting face that rotates and removes soil via a conveyor system, slowly boring a tunnel underground.

Sections of 2.1-metre diameter stormwater pipes were laid throughout the tunnel from Tonar Street to the outlet in Akoranga Reserve, where the stormwater will discharge into Hillcrest Stream. A special rock apron is being built at the outlet, using 600 tonnes of basalt from works in Ōwairaka as part of the Roskill Development, to slow the flow of water during heavy rainfall. This will help to maintain the natural flow and ecology of the stream and prevent scouring from high volumes of water.

“We’re starting to achieve some of the outcomes we wanted from the beginning. A lot of work goes into planning and design, so seeing it actually happening is really cool.”

The dig site in Tonar Street has been refilled and replanted with grass. Kaipātiki Project plans to regenerate the area around the outlet, which is Department of Conservation land, with native trees.

The underground tunnel is just one part of much wider stormwater improvements in Northcote, which are critical to the future resilience of the growing suburb.

The redevelopment of Greenslade Reserve will include a range of innovative stormwater solutions, including a lowered sports field, flood wall, and a native urban wetland. The daylighting and restoration to Awataha Stream will also help to manage stormwater flows.

“In a one in 100-year rainfall event, all of that water will funnel into the field at Greenslade Reserve, filtering it through the whole greenway, and releasing it slowly through the new pipes to Akoranga Reserve, eventually reaching Waitemata Harbour,” Umesh says.

“These largely unseen, underground projects are critical to the success of the development and the lives of Northcote residents.”