The Awataha Greenway Project is a significant part of the broader Northcote Development Project. Come completion, it is envisaged that the greenway will be considered an important piece of natural amenity, to be well utilised by existing and future residents alike.

What is a greenway?

A greenway is a green ‘corridor’ designed to make it easy and pleasant for people to move around part of a neighbourhood or city. Northcote’s new greenway follows the path of the former Awataha Stream to the sea. The greenway forms a network of parks, public spaces and quiet streets that provide a safe and healthy environment for people, plants and wildlife. Some greenways, including this one, provide for the movement and cleaning of water as well.

What is its purpose?

The greenway will provide a place to walk or cycle, play and meet people. The route will safely connect the community to local destinations, including the schools, town centre, public transport stops and recreation spaces, and access the wider city cycle network. It will provide opportunities to learn about the natural world, and help with overland water flow to reduce flooding. 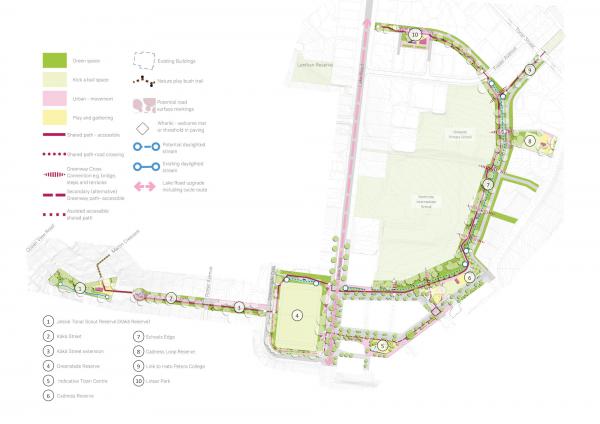 Water from the existing stormwater pipe running alongside the schools will be opened up (or “daylighted”) in a recreated stream channel. Water safety has been carefully considered in the design – for example, it has been designed so that, most of the time, a low base flow will run along the stream bed. The stream and its banks have been designed to have a gentle gradient, making it easy to get to, and away from, the water. Access points will be controlled by planting and features such as stepping stones.

A design influenced by the community

Panuku Development Auckland and HLC have been working with the Northcote Greenway Community Reference Group, the Mana Whenua Kaitiaki Project Working Group and the Kaipātiki Local Board to gather a wide range of input for the Awataha Greenway Project.

Valuable insights have emerged from these sessions and are informing the ongoing design of the greenway. 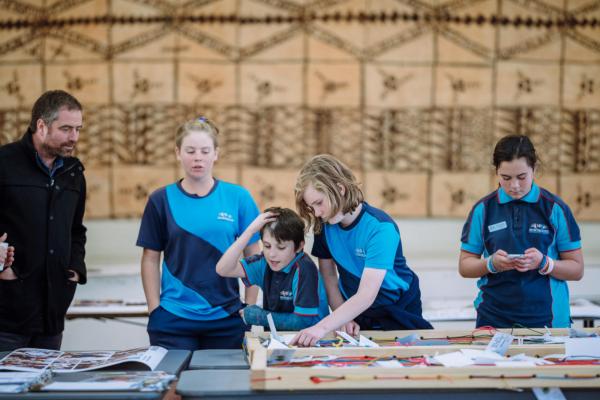 The design work is at its most advanced for the Schools’ Edge part of the greenway and the Greenslade Reserve and Jessie Tonar Scout Reserve improvements. These three areas will be built/upgraded first.

It’s important for students to play a leading role in the design process for the portion of the greenway that extends alongside Northcote Intermediate School and Onepoto Primary School. The Design Lab sessions have captured students’ ideas and vision for how the greenway should look, feel, and function. We have used these ideas to create a design brief for an outdoor classroom. 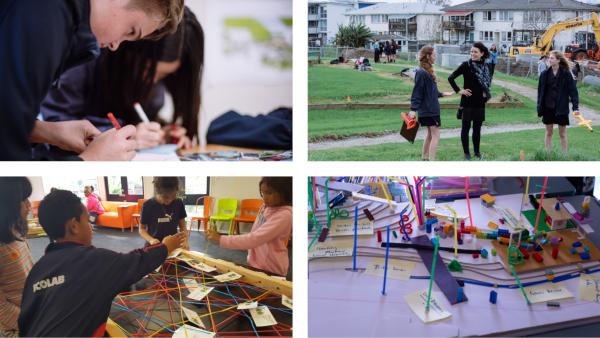 Panuku and HLC completed the developed design phase late last year, and are soon to begin the detailed design phasePanuku Development Auckland and HLC are now in the ‘developed design’ phase for the School’s Edge portion of the greenway. This section has the potential to become an outdoor classroom as well as a place for the wider community.

The Kaipātiki Local Board endorsed the Developed Design of the school’s edge portion of the Awataha Greenway Project in November 2018. This has enabled the project team to commence the detailed design with the confidence of their support. Following further discussions with the Ministry of Education, on its direction, the design will be adjusted through the detailed design phase to accommodate the retention of the Onepoto Awhina building. 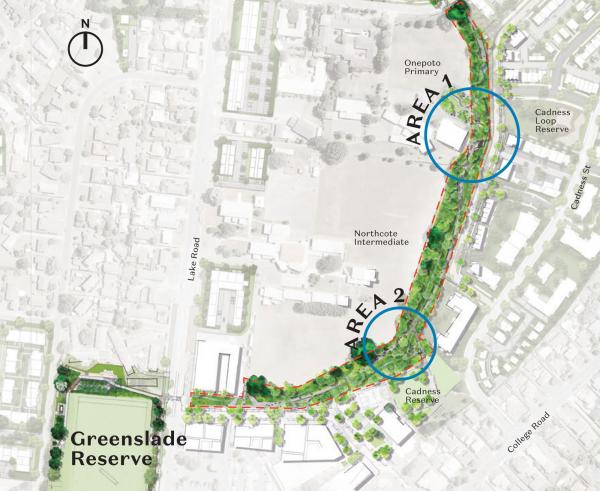 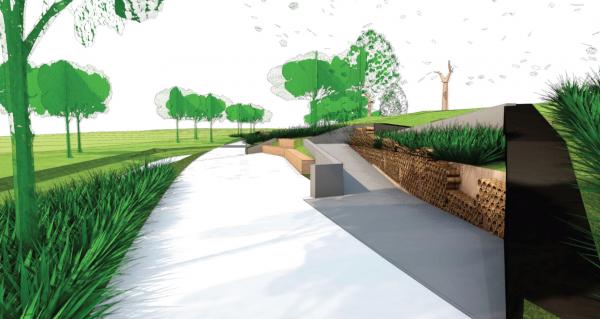 Greenslade Reserve has Awataha Stream running along its edge and forms a key part of the greenway. We’re working with Auckland Council’s Healthy Waters department to reduce flooding in the surrounding town centre and to ‘daylight’ the stream. This will redirect the underground pipes above ground to improve the stormwater network and serve as a functioning urban wetland with publicly accessible features for all users. The existing reserve is being lowered and upgraded to provide the area with an improved sporting facility, integrated flood wall and new public spaces. The Greenslade Reserve design was lodged for consent at the end of 2018, and the project team is currently moving forward with Detailed Design. Construction is due to commence by the end of the year (2019). Local Board landowner approval will be sought in the next couple of months, and a final design will be presented. 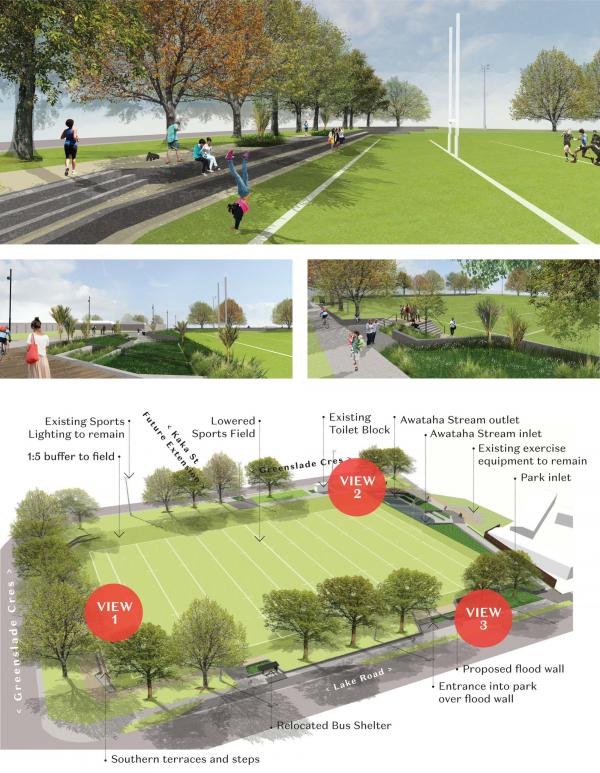 Panuku Development Auckland is working with Mana Whenua and local environmental group Kaipātiki Project on a community-led restoration of the Jessie Tonar Scout Reserve. This bush-clad reserve at the end of Kākā Street is home to the source of the Awataha Stream. The restoration project will include weeding, planting and education days, which will kick off in summer 2019. Join us to learn about the ecology of Northcote and to meet your local community. Contact Sam Tu’itahi to register your interest – community@kaipatiki.org.nz. 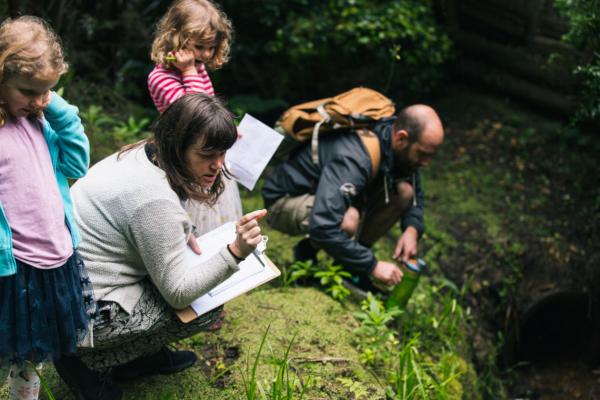 The Greenway project team has been working closely with Mana Whenua representatives and technical experts to establish an interactive tool to influence and measure the uplift in mauri (life essence) resulting from the Awataha Greenway Project. The tool ‘Take Mauri, Take Hono’ is in its final draft, and represents an important step in embedding matauranga Māori within the project, with the ultimate goal of creating a healthier and more resilient environment for all of life in Northcote/Awataha.

Art for the Greenway

The Awataha Project team is currently working with Mana Whenua representatives to appoint Māori artists to work alongside the designers to embed the cultural narratives of the Awataha Greenway within the project design. Outcomes of this collaboration will not be stand-alone art – rather integrated design features. Further to this, the Northcote / Awataha Public Art Plan is currently in its final draft.

As part of this Public Art Plan, an opportunity has been identified for public art to be part of the Jessie Tonar Scout Reserve project. While a small move, this act of revitalisation and renewal is a significant opportunity for public artwork at the source of Awataha Stream to be a contemporary expression of an ancient cultural treasure at the spring (puna) of a stream. Auckland Council acknowledges that this site is significant to mana whenua and this will be an important consideration of any public art project in this reserve.